What are the differences between a cold and the flu?

It can be very difficult to tell the difference between a cold and influenza. Both of those diseases are caused by viruses, and they have very similar symptoms, but there are some differences.

Influenza tends to be a much more serious infection. It comes on quickly and includes symptoms such as pretty high fever spikes, chills, severe cough, body aches, and fatigue.

A cold tends to be milder. It usually kind of ramps up over several days. Patients are more likely to have nasal congestion and runny noses with a cold than with the flu.

What is the difference between the “stomach flu” and influenza?

The term stomach flu is a little bit of a misnomer. The virus that causes what we think of as the flu, the influenza virus, doesn’t actually cause GI symptoms very frequently. Some patients with influenza will vomit, but it tends to be with coughing very hard. A patient who has mostly vomiting and diarrhea has a completely different virus than influenza.

Do you recommend getting the flu vaccine?

Absolutely, I recommend the flu vaccine to all of my patients. It is not a perfect vaccine. You have to get it every year, and the reason is because we try to predict which versions of the flu are going to be the most common ones. Then, we try to cover those in the vaccine and that changes every year. You have to get a new shot every year in order to protect yourself.

It’s not perfect because we may be a little bit wrong about which viruses were going to be most common. We may have gotten two of them right but then a new one comes up and that vaccine is not going to fully protect you against that. However, people who get the vaccine, even if they do end up getting the flu, tend to not get as sick as patients who are not vaccinated.

Is the flu shot the same across the country? 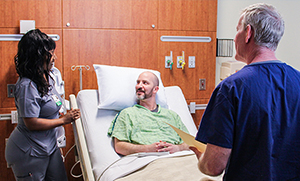 Tell us about a Memorial employee or volunteer who made your day.
Search The Memorial Network
COVID-19 Information