Learn from Pediatric Pulmonologist Dr. Cadence Kuklinski what cystic fibrosis is, how people get it, and how it is treated.

What is cystic fibrosis (CF)?

Cystic fibrosis is a genetic disorder. It’s actually the most common genetic disorder among caucasian people worldwide. It involves a problem with a channel in the cell, and the cells aren’t able to pump salt across themselves in the way that the rest of ours do. It results in really thickened mucus. The major organ systems that it causes problems with are the lungs and the GI system.

Talk about how patients get CF and how it’s treated.

You’re born with it, and there is no cure for cystic fibrosis. Treatment has come a long way in the last 10 to 20 years. We expect children born today with cystic fibrosis to have a much more normal lifespan and much more normal life. Some things that have been around now for 10 to 20 years are more advanced methods of what we call airway clearance. It’s things that we do to try to get that thick mucus up and out of those kids’ lungs so that they’re not as likely to get infections. There are multiple ways that we can do that. The most common thing that kids use is something called a vest, and it’s exactly what it sounds like. It’s a vest that they Velcro on and then it connects to a little machine. It shakes, and it helps vibrate that mucus off of their airway wall so they can cough it up and out. We also use medicines that they inhale either before, during, or after their vest treatments that help kind of loosen that mucus up and out of their lungs.

Patients with CF do airway clearance typically at least twice a day and even more frequently if they’re sick. Each session takes 15 to 20 minutes, sometimes longer, depending on how many medicines we’re asking them to do. It’s a real time consuming thing, but it’s very important.

Are there other treatments for CF patients?

The other thing in addition to airway clearance that has been evolving over the last decade or so are new disease-modifying drugs for CF. These are drugs that patients can take that directly affect that ion channel that allows the salt to be transported better. A new drug has come out that is effective for up to 90 to 95% of patients with cystic fibrosis. It is really making huge improvements in patients’ lung function, so we’re all very excited about that. It’s not a cure. It’s still a medicine that you have to take every day, twice a day. It helps them have mucus that is more like a normal person’s mucus. It helps their mucus become thinner and easier to clear. It helps their digestive tract secrete more of the things that we need to help us break down our food and digest things. It just makes life overall much easier for those patients. 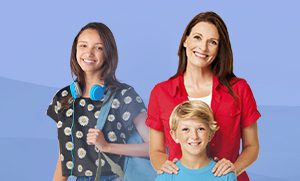