Memorial Hospital Speech-Language Pathologists (SLPs) treat a complete range of speech and language impairments with compassion and one-on-one care using the latest in speech therapy technology. SLPs treat a wide variety of impairments, such as swallowing disorders, aphasia, voice disorders and head and neck cancers, among others. 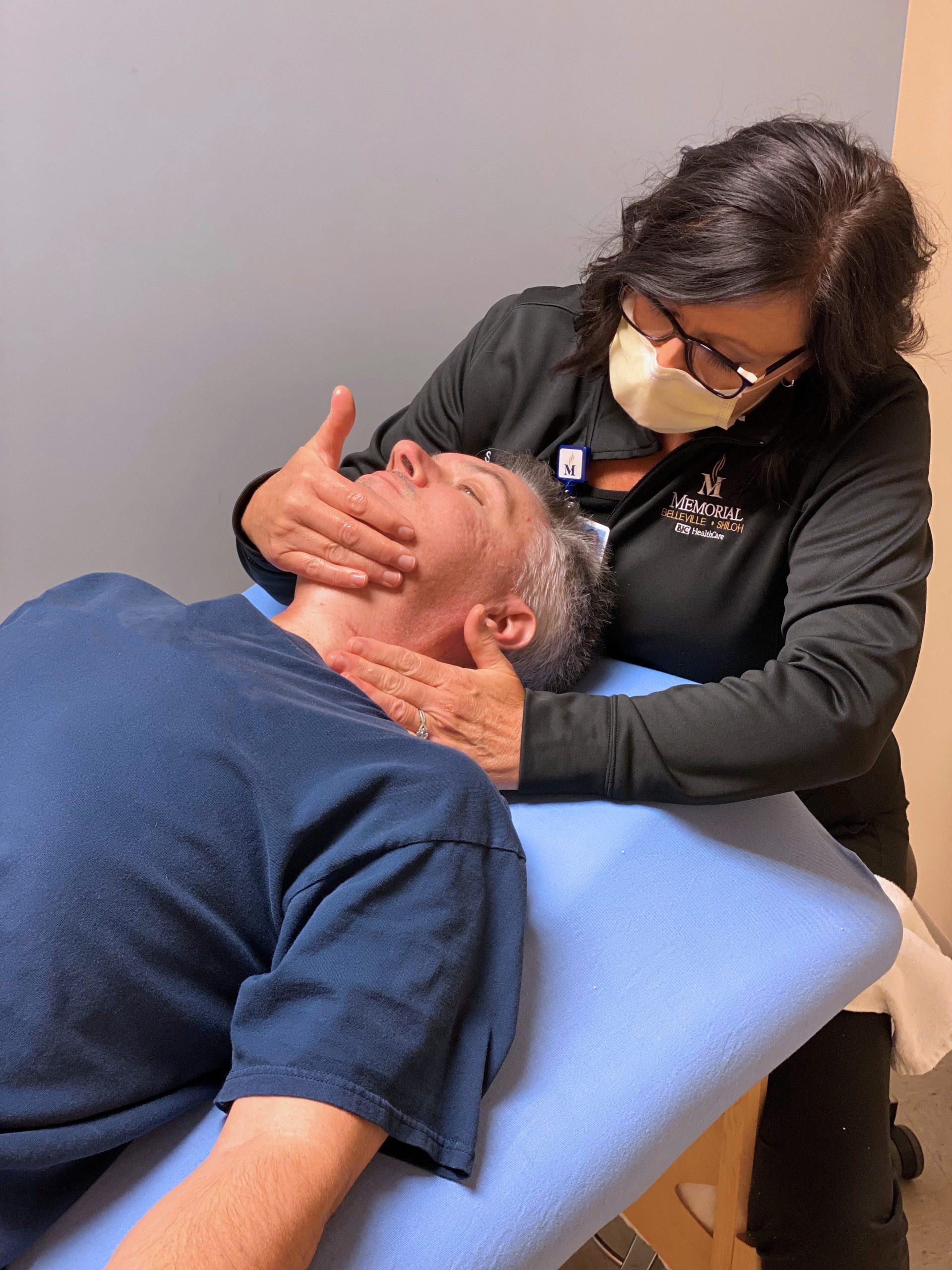 “Speech-Language Pathology has many unique aspects,” said Gwen Haake, speech-language pathologist at Memorial. “We work to prevent, assess, diagnose, and treat a diverse population with equally, if not exceedingly diverse needs. We treat babies to geriatrics, and it’s always changing and growing, so we have a very unique profession.”

Haake specifically treats patients who have gone through or are currently diagnosed with head and neck cancer (HNC).

“When I see patients before they begin treatment for their cancer, I evaluate their baseline function in regard to swallowing, voice, and speech,” she said. “I also educate them and their families on how the cancer treatment they’re about to begin will likely change their ability to swallow and speak, so I provide them with a preventative home exercise program for swallowing to reduce risk of long-term swallowing disfunction.”

Haake said patients aren’t always referred to an SLP prior to surgery or starting cancer treatments (radiation/chemotherapy/surgical intervention), which could mean swallowing and speech dysfunction is more likely to occur.

“Depending on the severity of the deficits, I might be able to help reverse some of the problems, but sometimes, it’s about preventing further decline,” she said.

Head and neck cancer patients who undergo radiation and/or surgical intervention can experience deficits that require therapy due to the trauma caused to the lymphatic system, Haake said.

“When a patient has surgery to remove the tumor or have lymph nodes removed, the cutting from the surgery permanently damages the lymphatic system,” she said. “This results in swelling in or near the surgical site, also known as lymphedema.”

Lymphedema can impair a patient’s ability to swallow, speak (form words), or voice (vocalize). Speech-language pathologists use manual techniques and tools to help these patients drain the excess fluid and teach them how to manage the condition at home.

Dan Semanisin, 50-year-old speech therapy patient at Memorial working with Haake, was diagnosed with Squamous Cell Carcinoma of the right tonsil and base of tongue at the beginning of 2022. Semanisin underwent a Transoral Robotic Surgery (TORS) resection and bilateral neck dissection (ND) followed by radiation beginning in February 2022.

Around three weeks after his TORS and ND procedures, Semanisin said he began to experience swelling under his chin, which was explained to him as lymphedema, and he was referred to speech therapy where he began working with Haake and Physical Therapy Assistant Peggy Heise.

Haake said she’s working with Semanisin on improving the lymphatic flow through Manual Lymphatic Drainage (MLD), a type of massage focused on directing lymphatic fluid away from the area of swelling to be properly drained, and trismus, or restriction of the range of motion in his jaw, which decreased following surgery and radiation. Trismus can impact a patient’s ability to place food in their mouth, chew food, control the food, transfer food to the back of their mouth, swallow and affects oral hygiene, she said.

“The tool I use to improve his range of motion is called the ARK-J Stretching Device (pictured),” Haake said. “It stands for amplification, resistance, and kinetics of the jaw. Not every patient with HNC develops trismus. It is dependent on various factors, such as site and size of the tumor, units of radiation, muscle and nerve involvement, and damage.”

With his lymphedema being a primary and on-going issue, Semanisin said the techniques helping him the most are the MLD and the Manual Therapy (MT) techniques Heise uses to manipulate tissue and soften scars allowing improved flow of lymphatic fluid.

“Lymphedema is something that happens quite frequently with head and neck cancer patients, especially when you have lymph nodes taken out,” Semanisin said. “(Heise) told me that the lymphatic system has different pathways for lymph fluid to move. Once you interrupt that process with surgery and radiation, you now have blockage from scar tissue acting like a dam. Now I have fluid pooling directly below my chin.”

Heise said Semanisin is benefitting from the combination of physical and speech therapy, and her MT treatments are in tandem with Haake’s MLD treatment to create better lymphatic flow.

“For many head and neck cancer patients, the fibrosis (hardened tissue) from radiation and scarring creates an impedance for lymphatic flow,” Heise said. “I am a manual therapist, certified in MLD and massage, so my techniques enhance Gwen’s treatment sessions. Our combined approach is our key to success, and our patients greatly benefit from our teamwork.”

Semanisin said it’s important to him that he’s able to spread awareness about getting screened for head and neck cancers while knowing if you’re more at risk.

“My cancer was caused by the HPV virus,” he said. “My physician said HPV-related cancers are increasing rapidly, and you’re more at risk for head and neck cancers if you have HPV. One thing I told my doctors, my family, and the therapists is that I want to educate people on this and getting checked regularly.”

Haake said the most important part of her job is education.

“I educate my patients and their families, my co-workers, peers and honestly, anyone who will listen,” she said. “Unfortunately, unless you have been through HNC or know someone close to you that has, people are completely unaware. Being able to share information to help raise awareness is a great opportunity.”

Semanisin said having this therapy available in the community is a great asset for those who are struggling after having been through cancer, radiation, surgery, and other issues.

“We have this tool and these resources available locally,” he said. “Memorial has a team of people who can help you if you have issues like mine with lymphedema or speech function. I didn’t even realize what all goes into actually swallowing – the components of the mouth and throat – it takes so much. You take it for granted when you’re able to do it without difficulty.”

He said whether it’s at-home exercises or in the office, Memorial’s Speech and Physical Therapy Department has really helped target his problem areas and strengthen his abilities. As of June 2022, Semanisin’s most recent scan came back with no signs of disease.

“We are a team in this department,” Haake said. “A team that includes speech therapy, physical therapy, occupational therapy, the patient, and their caregivers. Together, we work to help a patient gain as much prior level of function as possible.”